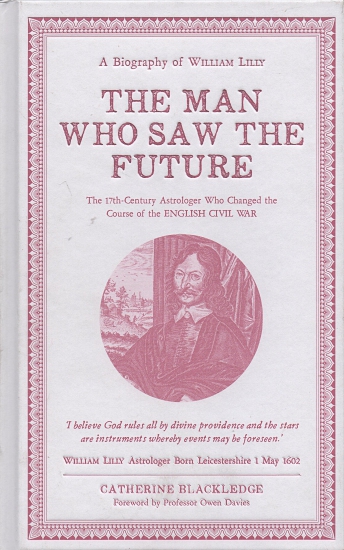 Blackledge, Catherine: The Man Who Saw the Future - a biography of William Lilly the 17th Century astrologer who changed the course of the Civil War (15389)

Winter, 1643. Astrologer William Lilly is gazing at a pot of piss. Parliament has asked him to help: will leader John Pym live or die? Using an ancient technique called horary, Lilly predicts Pym will die in eight days' time. He is correct. In the pages of his best-selling pamphlets, Lilly enthralls the civil war-torn nation with his uncannily accurate forecasts of who will triumph in combat. Parliament's new prophet directly influences the course of war by advising the New Model Army when to fight, based on his judgement of Charles I's horoscope - the key battle of Naseby is won with this insight. Lauded as England's Merlin, Parliament sends him to the battlefield to boost morale with astral propaganda. At the same time, mercurial and wily Lilly provides stellar counsel to both the King and the rising radical sects too. His status as the nation's arch magus is sealed when he correctly foresees Charles' death. Now the most famous man in England's republic and the leader of a growing counter-culture group, Lilly's extraordinary influence is revealed when his warning words about a solar eclipse scare the country to a standstill. But not everyone is happy about his visions of the future and their effect on public order: ministers try to outlaw the star science and he is charged with sedition. Worse is to come in the Restoration world. In private, Charles II and the elite still seek Lilly's guidance, but in public the establishment moves to silence him and ban prophecy. In 1666, when his forecast of a great fire engulfing London comes true, he is suspected of starting the blaze. Can his astonishing gift help him best those in power, and save his profession and his life?