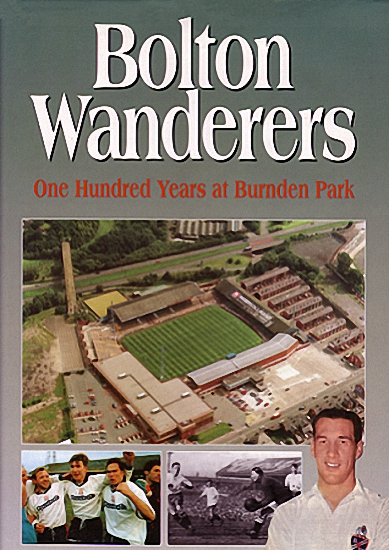 There are larger stadiums in the world, there are more impressive structures within half an hour's drive, but to Bolton Wanderers Football Club and its generations of supporters, Burnden Park has managed to capture both passion and excitement in its one hundred year history.
Every football ground in the country has a particular story to tell and Burnden is no different.

Built in 1895, on old barrels and cotton bales, the pitch became the most cambered surface ever seen in the Football League.

A great amphitheatrical bowl with neat fencing behind which the spectators observed not only football, but also athletics. The ground was opened on 17 August 1895 for the Wanderers' ninth annual meeting which attracted over 20,000 spectators.
The skyline was that of a typical Victorian industrial town, dominated by moorlands, factory chimneys, mills, rows upon rows of terraced houses and a unique railway embankment.

This book charts the history since then with memories of one hundred games played on the famous ground. From the FA Cup Final replay of 1901, known as Pie Saturday, to the ground's largest crowd of 69,012, a record set in 1933, and the disaster of 1946 when 33 people lost their lives. More recent events are also covered such as the demolishing of part of the Railway Embankment to build a supermarket and the possibility of long-term relocation.

Front cover shows: A recent aerial view of Burnden Park; Celebrations after yet another Cup `giant-killing', this time over Aston Villa in February 1994; On their way to the famous Wembley Final against West Ham, Bolton met Huddersfield in this third round match, where David Jack scored the only goal to send them through; The Trotters' most illustrious personality, Nat Lofthouse, whose 285 goals in over 500 appearances for Bolton and 30 goals for his country stand him amongst the greats of the soccer world.