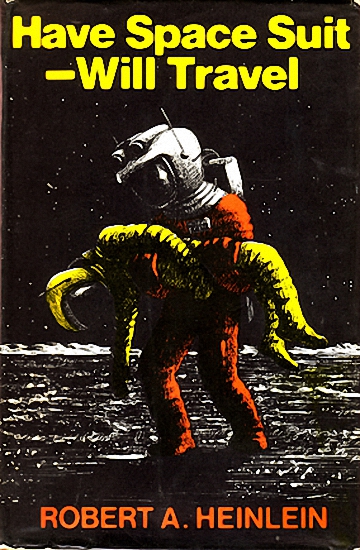 Heinlein, Robert A: Have Space Suit Will Travel (2389A)

Clifford Russell (Kip to his friends) is a teenager who is obsessed by a desire to go to the moon. He enters a contest in which the first prize is a trip to the moon, and although he doesn't win. he gets a prize—a second-hand space suit. His home efforts to repair the suit result in travel much more startling than the mere trip to the moon that he expects to make.

On the way Kip meets Peewee, a genius child of ten, who from then on shares his adventures and is, with him, involved in an inter-spatial cold war of mind-stretching dimensions.

It is on a planet much older than earth that the story comes to an astonishing and serious — climax. Kip finds himself asked to take an agonizing responsibility for the human race of his time.

As always. Robert Heinlein's story is carefully limited to the mathematico-physical possibilities of the real universe . . . but is as fantastic in concept as the universe itself.