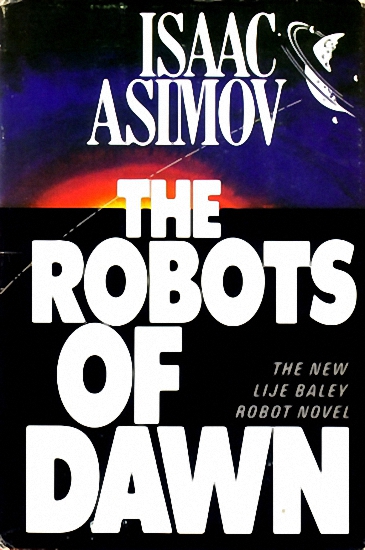 A puzzling case of "roboticide" takes interplanetary detective Elijah Baley from Earth to the planet Aurora—the self-styled World of the Dawn, where humans and robots coexist in seemingly perfect harmony. There, the most advanced robot in the Universe —an awesomely human machine—has been murdered.

Only one man on Aurora had the means, the motive, and the opportunity to commit the crime—and he has hired Baley to prove he didn't do it. And to make Baley's impossible mission even worse, he soon learns that not only his career but the fate of the Earth as well is riding on his investigation.

For the murder of the humaniform robot is closely tied to a power struggle that will decide the ultimate question: Who will be the next pioneers to colonize the Universe—man or his machines? And the answer to that question could spell either doom or new hope for an overcrowded Earth.
Armed only with his own instincts, his sometimes quirky logic, and the immutable Three Laws of Robotics, Baley sets out to solve the case. But can anything prepare a simple Earthman for the psychological complexities of a world where a beautiful woman could easily have fallen in love with an all-too-human robot?

Fresh from his phenomenally successful bestseller Foundation's Edge. the master returns with a science fiction mystery that brings back the charmingly irascible hero, Elijah Baley, a character that Asimov fans will remember from his adventures in The Caves of Steel and The Naked Sun. The Robots of Dawn takes us on a mind-stretching journey that recalls, too, the Asimov classic, I. Robot.