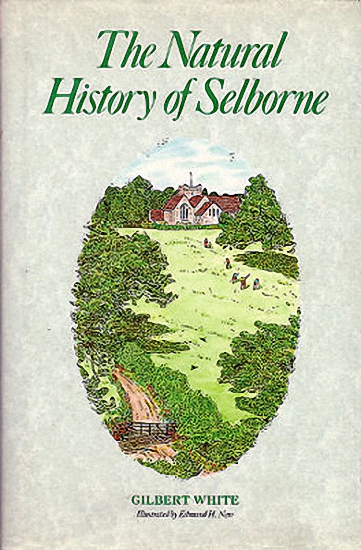 This famous turn-of-the-century edition of Gilbert White's Natural History of Selbome has been carefully reprinted to celebrate the bicentenary of one of the best-loved of rural English classics. Edited, with a historical introduction, by Grant Allen, it was also magnificently illustrated by Edmund New, one of that remarkable harvest of illustrators who came to prominence at the end of the last century. The result was a perfect balance: an affectionate evocation of a world so well observed by a contented country curate.

Gilbert White was born at the vicarage of the remote and secluded village of Selbome, Hampshire, on the 18th of July, 1720. Little is known of his quiet life other than that he was a fellow of Oriel College, Oxford, that he was a curate of the parish of Selbome and elsewhere, and that he perhaps, before finally settling back in Hampshire after his days at Oxford, 'passed some time ... as a gentleman farmer in the Isle of Ely' .

But, as Grant Allen goes on to say in his affectionate introduction to this perennially delightful book, the Reverend Gilbert White 'has left for us an account of his life ... far more graphic and valuable than any mere formal biography'. We owe it to the encouragement and correspondence of one Thomas Pennant, a Welshman who shared White's love of the natural world, that this 'account of his life' was begun, and continued over a period of almost twenty years. In answer to some questions of Pennant's, White 'entered into a brisk correspondence' around the year 1767, and as the correspondence grew, so Gilbert White was encouraged, by Pennant and others, to prepare his precise and loving observations of 'the natural history and antiquities of Selbome' for publication.

The Natural History ofSelbome first appeared in 1788-89. The edition here presented was published in 1900, and Edmund New's delicate line drawings radiate the peace and unhurried restfulness of eighteenth-century village life. Within these pages is a view of rural England now sadly far from us. The mechanisation and the urban invasion of even our remotest country places has driven this world far back into history. But through the eyes of the Reverend Gilbert White we can, for a time at least, re-enter the life 'passed tranquil and serene, with scarcely any other vicissitudes than those of the seasons'.

There are 183 illustrations in all, including 72 of birds and other small animals, and of which 31 are full page, with 4 pages of maps.