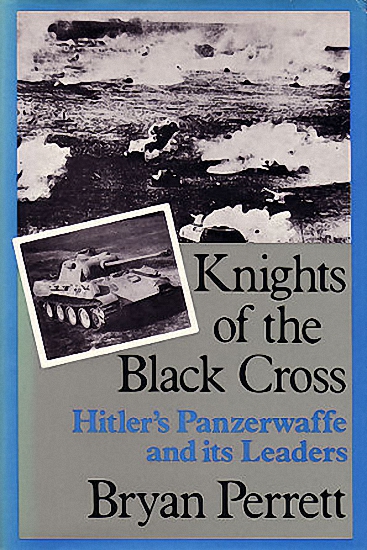 Perrett, Bryan: Knights of the Black Cross - Hitler's Panzerwaffe and its Leaders (5648)

The German Armoured Corps - the Panzerwaffe - was instrumental in the mighty conquests of the Nazis between 1939 and 1942 and in the remaining years of the war it provided the very backbone of Germany's defence. Although its strength never exceeded one-fifth of the German Army, the commitment of the Panzerwaffe's officers to the traditional Annihilation Concept made an enormous impact on the Second World War, particularly on the Eastern Front. The titanic struggles which took place there. after the early victories in Poland, the West and the Balkans, demonstrated the German tank soldiers' superior tactical abilities and provided the basis of Soviet war theories to this day.

Bryan Perrett's meticulously researched and incisive account tells the story of this remarkable band of soldiers, the evolution of their tactics and the development of their superlative fighting vehicles. An authoritative study which will fascinate the military expert and general reader alike.