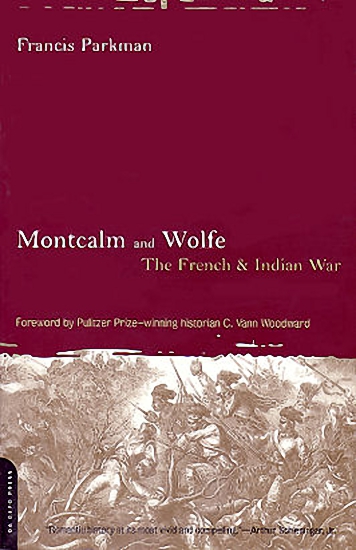 “The strife that armed all the civilized world began here, “ wrote Francis Parkman of the conflict between the French and British in the New World. ‘Montcalm and Wolfe’, long considered Parkman’s masterpiece, is the grand, sweeping tale of that continental strife – what North America called the French and Indian War, and England called the Seven Years’ War.

‘Montcalme and Wolfe’ frames the war years through the lives of its two brilliant opposing generals. Weaving together the campaigns on both sides of the Atlantic, Parkham travels from opulent royal courts to muddy colonial fields, from Fort Necessity to the Plains of Abraham. He couples impeccable history with rich, insightful narration, revealing the war as a deeply personal conflict between Louis de Montcalm and James Wolfe, the two ambitious leaders who ultimately died heroes’ deaths on the frontlines.

Accompanied by over 40 detailed maps and illustrations – some selected specially for this edition – Parkman’s timeless work shows how the enormous transfer of land from France to England at the war’s end sowed the first seeds of colonialism – seeds that, in due course, led America to its revolution, and eventually, its independence.