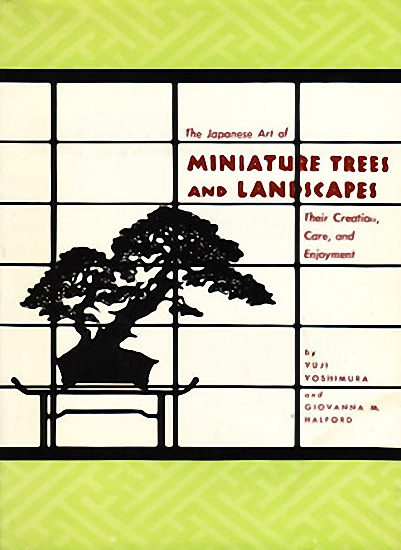 Now at last an eminently practical book about one of Japan's most fascinating arts. Japanese miniature landscapes and, particularly, dwarf trees -"bonsai," as they are frequently called even in the West - have long been admired throughout the world, and large sums have been spent importing them into other countries, often only to have them die. There is something so magical, unearthly even, about their gemlike beauty that their creation has generally been thought an occult science, and for the layman even their care and preservation have seemed to be shrouded in mystery.

As this book proves, however, the creation and care of bonsai is a comparatively simple art which can actually be systematically taught rather than, as in earlier books on the subject, just talked about vaguely. Now, given a reasonably green thumb and a modicum of patience, anyone in any country can create his own bonsai; and still easier is it to apply the few matter-of-fact rules necessary to keep a finished bonsai in healthy and vigorous condition for generations.

Here are detailed instructions, together with many helpful diagrams and charts and a treasury of photographs, on every phase of the art: propagation and training, with hints for those in a hurry and for small-apartment dwellers; daily and seasonal care, and treatment of pests; how to judge, select, and exhibit bonsai, with emphasis always upon the untold enjoyment they can provide. Included also, for those who want still more detailed information, are invaluable appendices concerning tools and equipment, soil analyses, and precise data on the more than three hundred species of plants used in making bonsai.

This, then, is a definitive work, one which has long been needed and which will remain the bonsai book for years to come. It is a book for those who want to try their hand at a fascinating hobby; for those who, preferring to buy their bonsai ready-made, want to fulfill their responsibility of preserving such miniature loveliness; and for those who want simply to understand more about one of Japan's most treasured traditions, "sculpturing beauty in living wood."