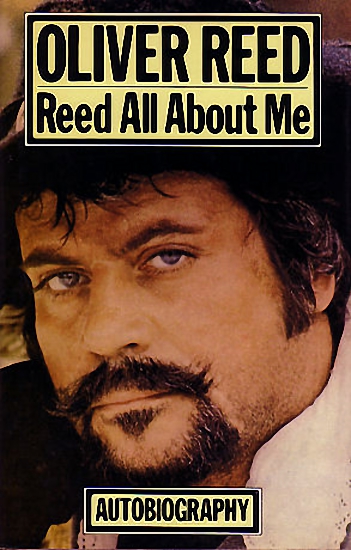 Out of step, out of time, Oliver Reed rollicks the world's headlines as a hellraising chauvinist who doesn't give a damn. 'Thank God,' said an awed Russell Harty on TV, 'there are people like you through whom we can live vicariously.'

Now, in Reed All About Me, the man who does it his way tells it his way in a delightfully funny autobiography that is happily free of the usual show-business genufiexions.

From the marvellous opening line - 'My father found me through a ration book' every page is a surprising revelation.
His granny May gave his grandfather, Sir Herbert Beerbohm Tree, six love children including Sir Carol Reed - and gave Oliver a direct bastard descendance from Peter the Great.

But he ignored family influence, ran away from home, and made it to the top as an international film star with successes such as Women in Love and The Devils.
Oliver Reed bows to no man, only to the ladies. And he writes about them with devastating charm: 'I never cease to be fascinated by naked women or by a new kiss, a new romance or a new flirtation,' he says. 'But I don't have many women as platonic friends. I prefer my relationships to be far more direct than that.'

Read about how Oliver clashed with Bette Davis; the night Shelley Winters poured a bottle of whisky over his head on a TV show; the antics which resulted in him being barred from the Beverly Wilshire Hotel in Hollywood; and how he took away Lee Marvin's drinking cloak.

What more can we Billy Walter Mitty Liars ask of a true man other than true grit and a delicious sense of the absurd.