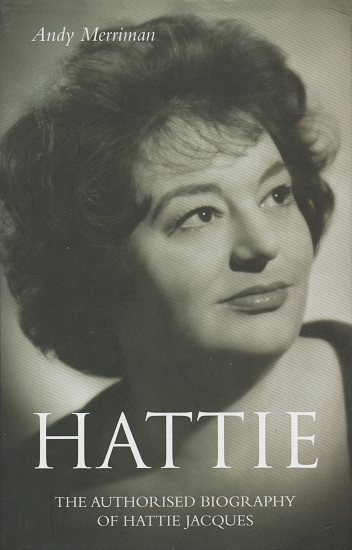 "For over thirty years Hattie Jacques was a familiar presence on radio (Hancock's "Half Hour"), television (60 episodes of "Sykes" alone) and film (she was a stalwart of the "Carry On" series). But her stage persona of a buxom, masterful female dragon who, both literally and figuratively, carried all before her (the formidable matron of "Carry On, Nurse" was a typical role) could hardly have been more at odds with her off-stage personality. Warm, impetuous and generous to a fault, she was almost pathetically grateful for any show of affection and painfully self-conscious about her figure which, she believed, had caused her to be type-cast in comic roles and never given the opportunity to tackle more serious parts. In 1947, after a tempestuous wartime affair with an American officer, she married the actor John Le Mesurier who was persuaded to divorce her in 1965 - though only after she had moved her chauffeur-lover into the marital home. It was, however typical of her that she actively encouraged Le Mesurier to remarry and the two remained firm friends until her death. Her lover's subsequent desertion was a bitter blow from which she never fully recovered, though she compensated my involving herself deeply in charity work and becoming a confidante to many of the young actors and actresses with whom she worked. This biography has been written with the help and encouragement of Hattie's surviving son and her many friends, including Barbara Windsor, Clive Dunn, Bill Pertwee and John Le Mesurier. This is the first full biography of one of Britain's best-loved actresses. It reveals the secrets of the sometimes strange and often sad private life that was concealed behind the matronly facade. It is written with the full cooperation and support of Hattie's family and friends.”