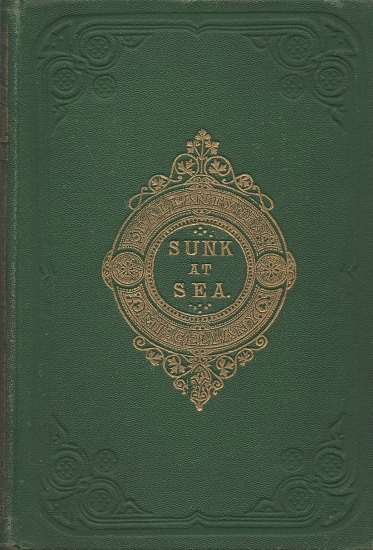 Ballantyne, R M: Sunk at Sea; or The Adventures of Wandering Will in the Pacific (15363)

The story starts with the childhood of one of Ballantyne's perpetual heroes, Will Osten. Will would love to have a career at sea, but his father, a very successful businessman, thinks otherwise, so eventually Will agrees to study medicine. However, before his studies are over he decides that he really must go to sea, and he joins a friend of his, Captain Dall, on his ship. They travel to the Pacific, where they encounter some very heavy weather as a result of which a plank is started in the ship's hull, and she starts to sink. All attempts to find and stop the leak fail, and she does indeed sink, with the crew taking to the boats. Eventually they reach a small coral island, but they have not been there long before a visiting native war canoe perceives them and takes them to another much larger island, where preparations are made to kill and eat them. Luckily there is an old white man there who has long been accepted by the natives and who gets our heroes and his friends off this rather dire treatment, but was too late for some of the crew.