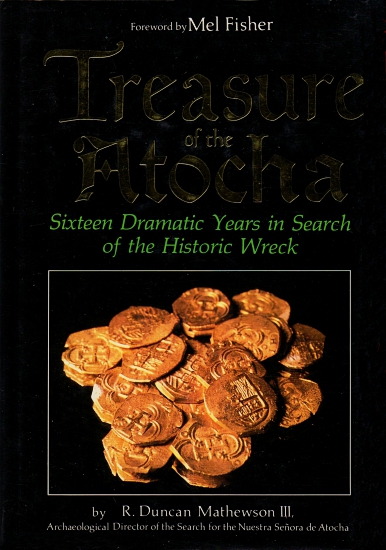 Mathewson, R Duncan F'word by Mel Fisher: Treasure of the Atocha - sixteen dramatic years in search of the historic wreck (9855)

Finally, the authorized story of the world's greatest treasure hunt has been told. Treasure of the Atocha bears witness to the remarkable persistence and skill of a dedicated team of archaeologists, scientists, historians and divers who have recently uncovered the most fabulous treasure wreck of all time. Generations of treasure hunters have failed to find the location of the great Spanish galleon, Nuestra Senora de Atocha, since she foundered in a sudden hurricane in September 1622 and was swept headlong into the coral reefs of the Florida Keys. She had been bound for home from Havana in a fleet of Spanish ships filled to the gunwales with the wealth of the colonies. But instead of enriching the coffers of the young King Philip IV, the treasure sank to the ocean floor, and there it remained for over 350 years. But now, after a sixteen-year search by Mel Fisher and his team, the remains of the Atocha and her rich cargo have been recovered. Treasure of almost inestimable value - gold doubloons, silver ingots, pieces of eight, precious stones, fine jewellery and everyday objects of enormous archaeological interest-has been retrieved from the sandy burial pit that concealed it for so long. Treasure of the Atocha tells the story of the agonizingly long search for the wreck, both through historical records and along the Florida coast. It tells of a series of tantalizing clues and of serious setbacks. But, with the aid of over 150 illustrations, most in full colour, it describes the sheer joy of uncovering one of the world's greatest treasure troves.