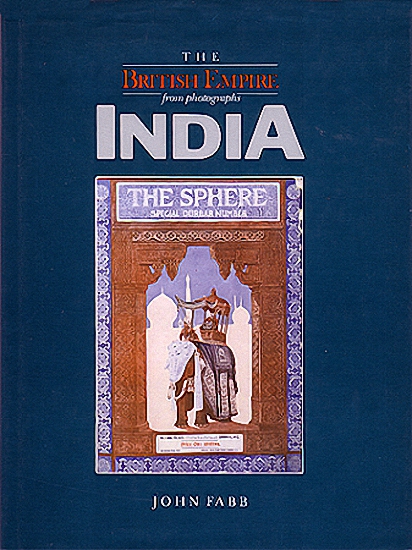 Fabb, John: The British Empire from Photographs - India (12113A)

Photography first went to India in the early 1840s and, ever since, photographers have set about recording this fascinating and exotic country. This book starts a few years before the Indian mutiny of 1857 and brings us up to the granting of Independence in 1947.

In his introduction, John Fabb explains the changing structure of Indian society which this book records. The photographs in the early part of the book concentrate on the native rulers, many of them fabulously wealthy. Then we are shown the British in India, for the most part the story of the army presence after the mutiny. Their leisure moments are portrayed too, though, enjoying tiffin (a light meal) on the lawn in 1870, a meet of the horse and hounds before riding off to hunt jackal in 1890, or playing cricket in 1864 at Kohat, on the north-west frontier. After the title of Empress of India was added to that of Queen of England in 1877, royal visits became a regular feature, which included, if possible, that most regal of activities - a tiger shoot.

From native rulers to British rulers, many interesting aspects of Indian life are covered, and it is fitting that some of the last photographs in the book feature Mahatma Gandhi, a man who was the representative more than any other of the move to dismantle the British Empire in India.

Throughout, there are detailed captions that guide the reader over these 114 photographs of the last 100 years of this part of the Empire, and even those familiar with this period of Indian history will here find much that is new and intriguing.

The jacket illustration shows the cover of the issue of The Sphere magazine celebrating the recent crowning in December 1910 of King George V and Queen Mary as Emperor and Empress of India. (Illustrated London News Picture Library)