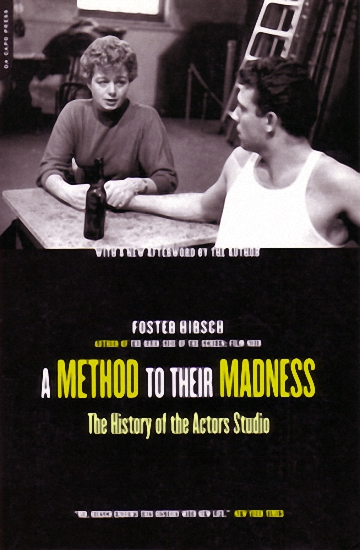 Hirsch, Foster: A Method to their Madness - the history of the Actors Studio (11665)

How do professional actors manage to create and embody wildly varied characters? How do their best performances resonate so strongly with audiences? Many of the most revered practitioners of the trade—Al Pacino, Marilyn Monroe, James Dean, Shelley Winters, Paul Newman, and dozens more—credit their greatest theatrical education to one small room on Manhattan's West 44th Street, the home of Lee Strasberg and his Actors Studio. There, in the 1950s and 60s, these legendary performers absorbed the Stanislayskybased 'Method' acting that was Strasberg's trademark, and launched unforgettable careers.

In his classic history of the Studio, A Method to Their Madness, Foster Hirsch studies the early years, remembering Strasberg's controversial exercises, and revealing how the Studio's most successful alumni forever shaped theatrical history. But he also goes behind the scenes, spending months observing its twice-weekly acting sessions, interviewing its longtime members, and piecing together its internal politics. Now featuring a new afterword profiling the Studio's evolution since the turn of the millennium—from its worldwide television series to its highly prized MFA program—A Method to Their Madness is an essential account of the most influential acting institution America has ever known.

"From the beginning... Stanislaysky's ideas have ignited the fire of controversy, and nowhere more so than at the Actors Studio, the famous New York workshop where [they were] transformed into `the Method."' — New York Times Book Review