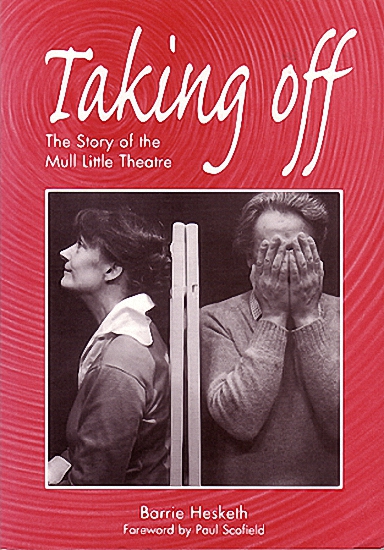 Hesketh, Barrie F'word by Paul Scofield: Taking Off - The Story of the Mull Little Theatre (7150)

The setting was a guesthouse on the Hebridean island of Mull, one summer evening in 1966. The line was addressed to the after-dinner guests. The scene then moved across to a tiny, converted byre. And a unique adventure took off —the Mull Little Theatre. This is the story of Barrie and Marianne Hesketh's life together — from their early acting careers and the steps that led them to Scotland — to the leap of faith that created the country's smallest professional theatre — through drama on and off stage, at home and on tour — and finally to Marianne's courageous struggle with terminal illness. A story of survival, told with spirit and humor.
‘...a story of artistry and perseverance and love' (Paul Scofield)

Barrie Hesketh was born in Birmingham in 1930. He and his wife Marianne ran the Mull Little Theatre from 1966 until 1984. His retirement, spent until recently in East Anglia, has been occupied with writing about Shakespeare. He now lives in the north-east of Scotland. He has three sons, Richard, Nicholas and James.