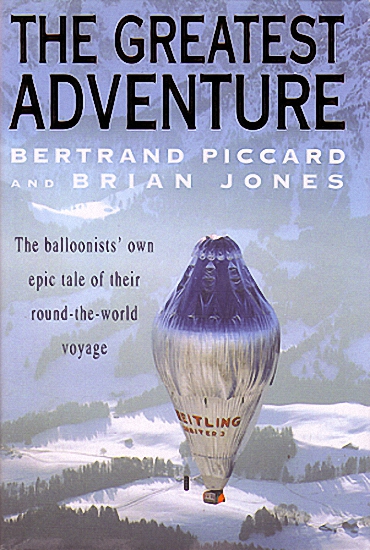 In this tense and often moving narrative, Bertrand Piccard and Brian Jones, the pilots of the Breitling Orbiter 3 balloon, tell the remarkable story of their record breaking round-the-world flight in March 1999, one of the great feats of human endurance.

By the time Piccard and Jones took off from Switzerland they had already had to overcome many problems, and the prospects of winning the race to be first round the world looked poor — a rival balloon was days ahead of them. Yet in the end they made history. The flight was a triumph not only of technology but of the human spirit.

During their 30,000-mile nineteen-day voyage, they survived numerous crises: for two days they lost communication with the world below, at one point they were almost overcome by poisonous fumes, and at 35,000 feet — with the outside temperature minus 50°C — their heating failed and water froze inside their tiny gondola, no bigger than a lift cage.

By the time they reached the Gulf of Mexico, their fuel had run perilously low, and their decision to carry on across the Atlantic reflected their courage and determination to succeed where others had failed. The further they flew, the more they became convinced that they were being guided by some invisible hand which brought them repeated strokes of good fortune.

Using their log book, journals and photographs taken on board, Piccard and Jones have brought their marathon flight vividly to life, capturing many moments of high tension and emotion. Their account tells of an epic adventure but shows also how two very different characters forged a unique relationship in the most challenging circumstances of their lives.