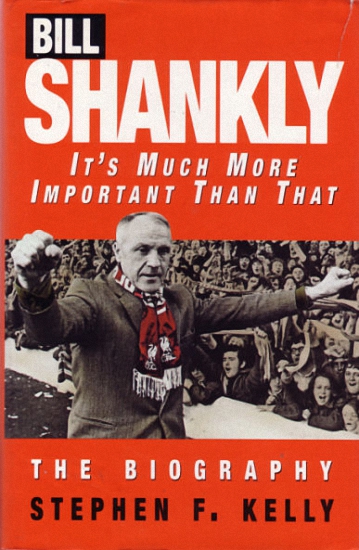 Kelly, Stephen F: Bill Shankly - It's Much More Important Than That - the biography (12558A)

As the man in charge of Liverpool FC, Bill Shankly laid the foundations from which his club grew to become a major power in European football. In his time as manager, Shankly discovered a wealth of footballing talent, and the players whom he nurtured were destined to dominate the British game: among them were Steve Heighway, Ian St John, Ron Yeates, Kevin Keegan and Ray Clemence, to name only a few.

But Shankly was more than just a football manager. His quick~fire responses to impertinent questions, his blunt observations on the game and his straightforward honesty made him a folk~hero to the footballers and managers who followed in his wake. Kevin Keegan, himself now manager of Newcastle United, is just one of Shanks's former charges to pay constant tribute to the great man. Above all, though, Bill Shankly's memory is cherished by the countless thousands of fans for whom he was a leader, an example and an inspiration.

Memories of Bill Shankly will live on in footballing legend long after lesser names have been forgotten. For this full and frank biography, Stephen F. Kelly has interviewed many of Shanks's friends, family and former team~mates, including Tom Finney, Brian Hall, Phil Thompson, Geoff Twentyman and Denis Law. The story they tell is a powerful and inspiring tribute to the determination and achievements of a remarkable man.