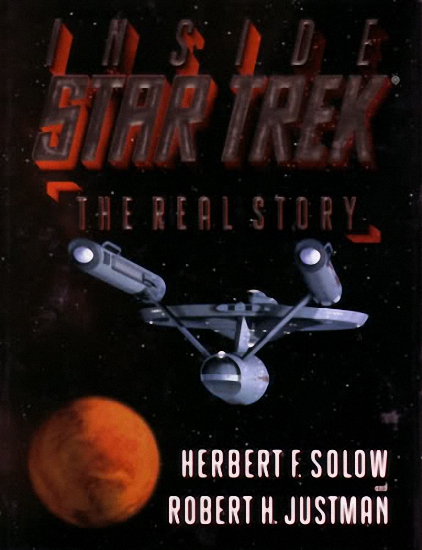 Before the actors were cast, before the U.S.S. Enterprise was designed, before the phenomenon exploded, there were three men who set about creating the Star Trek legend. Gene Roddenberry died in 1991. Herb Solow and Bob Justman now remain the only two people on the planet Earth who really know what happened in those early, heady days.

In the beginning of 1964, Herbert F.Solow was hired to run television production for Lucille Ball's struggling Desilu Studios. In April of that year, a rumpled, soft-spoken ex-cop named Gene Roddenberry walked into Solow's office with an idea for a now science fiction television series called Star Trek. Immediately seeing the show's potential. Solow struck a script development deal with Roddenberry on the spot.

Soon, Solow and Roddenberry brought Robert H. Justman on board as assistant director to work on what was to be the first of two Star Trek pilots and, later, to act as associate producer on the series. Together, the three men embarked on an incredible odyssey that would make television history.

With Herb Solow running interference—both within the closed walls of the studio and between Desilu and NBC—and Bob Justman handling all phases of weekly production, Star Trek® endured its birth pangs. Finally, when Solow hired Roddenberry to produce the initial sixteen episodes ordered, the fledgling series began to assume a life of its own.

Inside Star Trek is a comprehensive look at the development and life of a television and cultural phenomenon. It is also a story no one else could tell. Between them, Solow and Justman had a hand in virtually every aspect of the development and production or Star Trek—from the battles with NBC and the internal conflicts with studio executives to the behind. the scenes decisions about actors and their characters. writers, scripts, directors, budgets, and the endless details of weekly television production.

Since 1964, Solow, executive in charge of production for Star Trek, has been silent about the legends, distortions and misrepresentations that grew around the show he developed and sold to NBC, the pilots he developed with Gene Roddenberry, and which he carries in his memory as part of a distinguished career. Bob Justman, as associate producer and then coproducer of Star Trek (and subsequently supervising producer of Star Trek The Next Generation, among other series) has been a popular speaker at Star Trek conventions, known and loved by fans around the world.

Together, in this book, the two men debunk many of the myths that have developed around Star Trek in the last thirty years as they create new ones based on facts.

At last, here is the simple, fascinating and accurate account of a unique television series launched against astronomical odds—a television series that transported millions of viewers into another world and into an unprecedented, thirty-year, multimedia, multibillion-dollar cultural phenomenon.