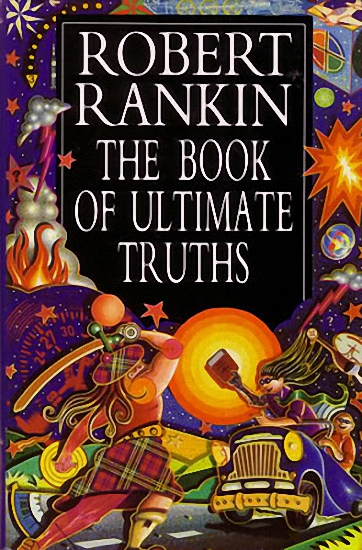 Rankin, Robert: The Book of Ultimate Truths (2182A)

He had walked the Earth as Nostradamus, Uther Pendragon, Count Cagliostro and Rodrigo Borgia. He could open a tin of sardines with his teeth, strike a Swan Vestas or his chin, rope steers, drive a steam locomotive and hum all the works of Gilbert and Sullivan without becoming confused or breaking dowr in tears. He died, penniless, at a Hastings boarding house, in his ninetieth year.

His name was Hugo Artemis Solon Saturnicus Reginald Arthur Rune. And he was never bored. Hailed as the `guru's guru', Rune penned more than eight million words of genius including his greatest work The Book of Ultimate Truths. But vital chapters of The Book were suppressed, chapters which could have changed the whole course of human history. Now, seventeen-year-old Cornelius Murphy, together with his best friend Tuppe, sets out on an epic quest. Their mission - recover the missing chapters. Re-publish The Book of Ultimate Truths. And save the world.