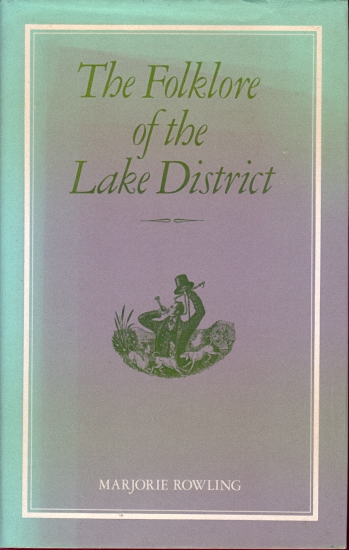 Rowling, Marjorie Drawings by Terence Dalley: The Folklore of the Lake District (14837)

The Lakeland counties (now known as Cumbria) have always possessed a strong cultural as well as geographical unity. Marjorie Rowling's insight both as historian and folklorist has revealed in this fascinating study the significance of place names, of local customs and traditions for recovering vital aspect of the past of this unique region. Stories of the supernatural, from the devil and giants like Hugh Heard of Troutbeck and Hugh Cesario of Penrith, to witches and magicians like Michael Scot; legends, including those of king Arthur and local saints; pagan and Christian symbols on local monuments, particularly spirals and mazes, help to highlight interesting aspects of the Dark Ages in Cumbria.

Old customs—Jolly-boyings, pace-egg rolling, drinking Spanish water in May, the wearing of oak sprigs and bobs on Yak Bob Day, and other traditional rites are still remembered by older Cumbrians who engaged in them when young, while Rush-bearings, local forms of wrestling and hunting, Grasmere Sports, Shepherds Meets, May-Day ceremonies, dialect plays and stories and folk dance festivals are very much alive: several of the famous Lucks are still treasured.

Born and brought up in Kirkby Lonsdale, Marjorie Rowling has lived in the Lake District nearly all her life. A member of the Cumberland and Westmorland Archaeological Society, the Lakeland Dialect Society, and the Folk Lore Society, she is also a Vice President of the Cumbrian Literary Group as well as the author of several books on medieval history, including Everyday life in Medieval Times and Everyday Life of Medieval travellers (both published by Batsford).