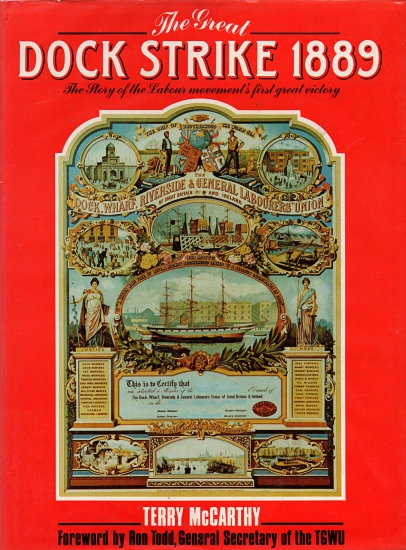 
The Great Dock Strike of 1889 is one of the labour movement's most famous victories. Inspired
by the success of the match-girls' strike, the dockers of London's East End, in an unprecedented display of solidarity for a group of workers thought to be unorganizable, walked out en masse and paralysed the docks.

The conditions in which the dockers lived and worked were pitiable and their demands modest. The Strike was led with great skill by Ben Tillett, John Burns, Will Thorne and Tom Mann. Relief funds were distributed to the strikers and their families with impressive efficiency, and the peaceful protest marches to the Oty generated a great deal of public sympathy for the dockers.

The dock owners, however, would not compromise and the dispute became bitter and protracted. On the point of defeat by starvation, the strikers were saved by a spontaneous outpouring of generosity from their fellow workers in Australia. In London, Cardinal Manning, speaking for the strikers, many of them Irish and Catholic, touched the middle-class conscience and assisted the Strike leaders in negotiating the terms of the settlement. The victory the dock workers secured helped many other groups of workers and sowed the seeds of the modem trade union movement.

Terry McCarthy’s vivid portrait of this momentous episode in labour history draws on newspaper reports of the time and the memoirs of many of the Strike leaders, and is accompanied by contemporary photographs and illustrations from the archives of The National Museum of Labour History.

The book is published to coincide with the centenary celebrations of the Transport and General Workers' Union, which traces its origins to the foundation of the Dockers' Union during the 1889 Strike. It will be of great interest to all trade unionists and will make absorbing reading for those interested in social and labour history.
With 100 black-and-white, and 8 pages of colour illustrations .