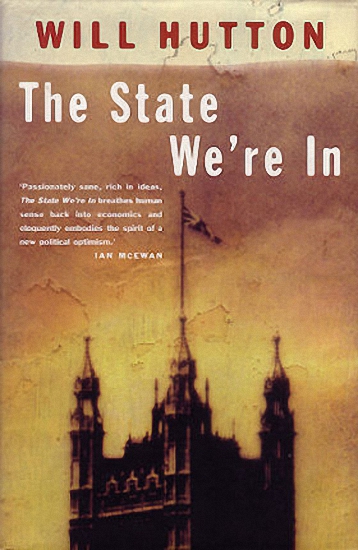 One of the world's great success stories - the British state and the British economy which it supported - is in serious trouble as it nears the twenty-first century. The State We're In is a passionate denunciation of the institutions that have brought us down, and a demonstration of the underlying systematic nature of our problems.

Hutton argues that the conditions of British success contained the seeds of decline. We were saddled with a financial system that valued immediate profit over long-term commitment, and a cult of the 'gentlemanly capitalist' - the archetypal City gent - that permeated boardrooms, parliament and schools. Thatcher's revolution failed to dislodge him.

This book explores every aspect of the British malaise: the rise of the financial system and its contempt for industrial innovation; the transfer of the king's sovereignty to a sovereign parliament, so that Britain was denied the protection of modern forms of rights and a written constitution; and the social roots of the Conservative Party's domination of national life. The author goes on to show how the imposition of market values in every area of society after 1979 simply exacerbated the worst features of the system.

British companies' cult of the shareholder's shortterm interests is shown to be a disastrous mistake. Hutton demonstrates the fallacies of the economic thinking that guides government policy, and in a forceful international survey of successful capital isms shows that the market works best when competition is allowed to flourish alongside co-operation.

Nothing less than a reform programme that links economic, social and political renewal has any chance of lifting Britain once again into the big league. New values of commitment and solidarity can be supported by democratically reformed institutions, which in turn will foster economic success.