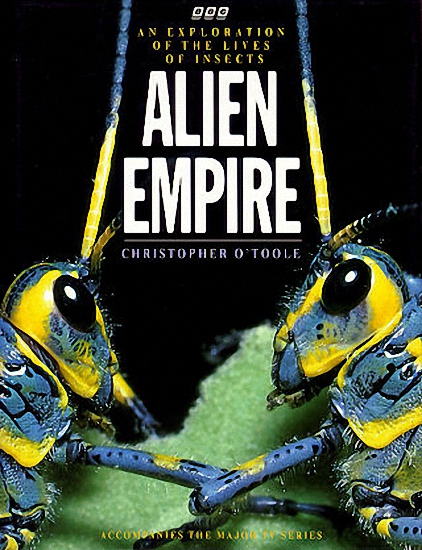 Insects are everywhere and in vast numbers too. There are at least a million species, ranging from microscopic beetles and wasps to beetles which are larger and heavier than the smaller mammals. They inhabit desert and arctic tundra, land and sea; they are even in our homes and on our bodies. Unsung toilers on our behalf, they perform most of the major ecological tasks upon which we and all other species depend. Many animals, birds and people rely on them for food, while all of our fruits and many of our vegetables are entirely dependent on them for pollination. We need to know more about these extraordinarily beautiful and complex creatures to understand their vital role in maintaining our planet's life support systems so that we are better placed to conserve them and, ultimately, our own living space.

Alien Empire, and the television series which it accompanies, open the doors into a world that we have never seen. We discover the design miracle of insects' bodies - external skeletons that can be adapted for any use; their sophisticated communication systems - on-board sensors which gather visual, auditory and scent data, with transmitters for emitting sound and light signals; how they function in co-operating groups; their fast and furious reproduction systems, and much much more about their strange structures and lives. As this book shows, in their looks and behaviour, insects are as close to an alien life form as any we are likely to find in the stars.

With its many beautiful photographs and drawings, and its clearly written text, Alien Empire takes the reader on a spellbinding journey into another world.