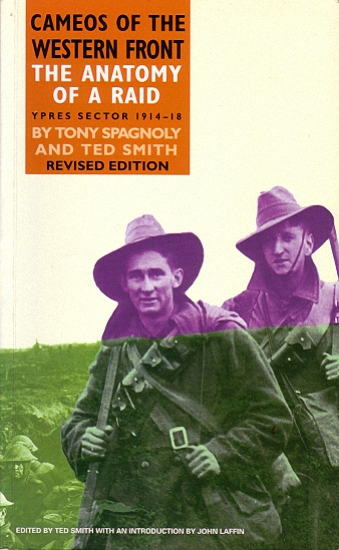 Anatomy of a Raid, Tony Spagnoly's and Ted Smith's first book, started life as a 'cameo' but they decided it merited a book in its own right, as was the case with their third book, A Walk Round Plugstreet.

This revised edition, covering the tragic raid on Celtic Wood, includes more information on the German regiment involved as well as information taken from an interview with the raid commander's elder brother.

After the successful battle for the Broodseinde Ridge and crossroads on 4th October 1917, a raid was planned as part of a series of actions acting as a diversion for the main attack on the Passchendaele Ridge. With its target a small woodland called Celtic Wood on the eastern slopes of the Broodseinde Ridge, a raiding party of 85 men of the 10th Battalion, 3rd Brigade, A.I.F. attacked at dawn on 9th October. The raid resulted in an unmitigated disaster and only 48 men were accounted for following it. What happened to those other 37 young Australians? Who recorded their deaths? Where are their graves? This book brings to the reader the detail surrounding this unresolved mystery of the Great War.