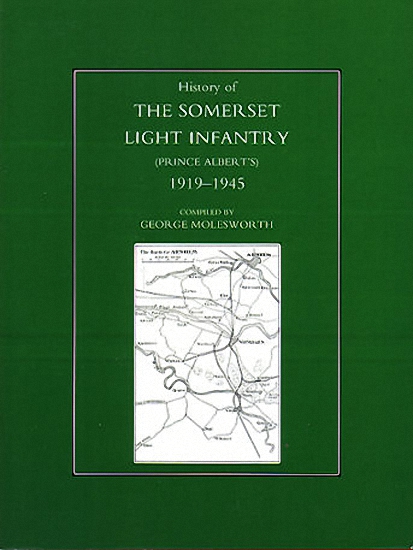 FOREWORD
This third volume of the History of The Somerset Light Infantry (Prince Albert's) deals with the period from 1919 to 1945. It covers the years between the two wars when the Regiment played an important part in the mechanisation, re-equipment and reorganisation of the Army for the tasks which lay ahead. It also covers the years of the Second World War in which the Regiment, like so many others, had to throw off new units and spend a long period carrying out essential garrison duties while training itself for the decisive fighting which was to come.

Years of waiting and training in time of war are apt to disappoint and discourage men who are anxious to fight for their country, but esprit de corps was proof against this danger. Battalions of the Regiment, both old and new, steadily increased in efficiency, inspired by the spirit of service and comradeship which has ever been a characteristic of the Somerset Light Infantry and, when the chance came, were ready to acquit themselves with honour in bitter fighting in many lands.

Regimental esprit de corps has always been the main strength of the British Army and this volume shows that in the late war it again brought us through the dark days to victory. If we continue to cherish that spirit, so that it remains an inspiration in whatever circumstances modern conditions of war may require the Regiment to serve, we need have no fear for the future.

We owe a deep debt of gratitude to George Molesworth, whose devotion to his old Regiment has led him voluntarily to devote so much time and skill to the writing of this volume.