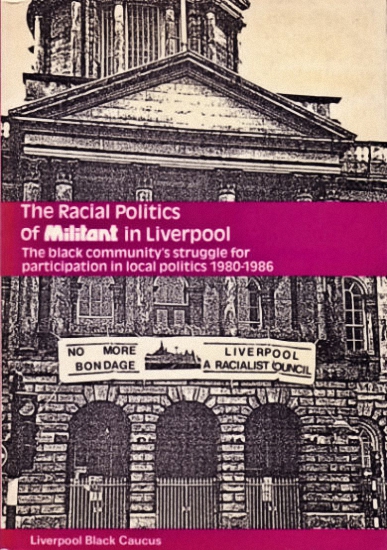 Liverpool Black Caucus: The Racial Politics of Militant in Liverpool - the black community's struggle for participation in local politics 1980-1986 (7303)

The last decade has seen a steady growth in the political participation and influence of black communities, and many serious attempts by local councils to challenge racial inequality at municipal level. Britain's oldest established black community lives in the long~declining city of Liverpool where generations of black people have faced and fought discrimination and disadvantage. In 1980 Liverpool City Council finally adopted an EqualOpportunities Policy and a broadly based Black Caucus emerged to campaign in the Council and in the community for this policy to become a reality. But the Caucus met solid resistance from the Council which, since 1983, has been ruled by a decisive Labour majority. The dominant force in the Labour Council is the Militant Tendency and it is their policies inspired by their analysis of racial politics that has brought the sharpest conflicts with the Black Caucus and dealt the most forceful blows to the policy.

This book describes the continuing battle of Liverpool's black community for political participation and racial equality in the face of powerful opposition. It is essential reading for all who are interested or involved in the struggle against racism and discrimination in political parties, local government and in the wider community.

The book includes a foreword by the Archbishop and Bishop of Liverpool and also publishes for the first time evidence submitted by Black Caucus members to the Labour Party National Executive Inquiry into the Liverpool District Labour Party.

The Liverpool Black Caucus is the group of representatives from local black organisations elected since 1981 to sit on the Race Relations Liaison Committee of Liverpool City Council, until the local Labour leadership abolished the Committee in 1985.