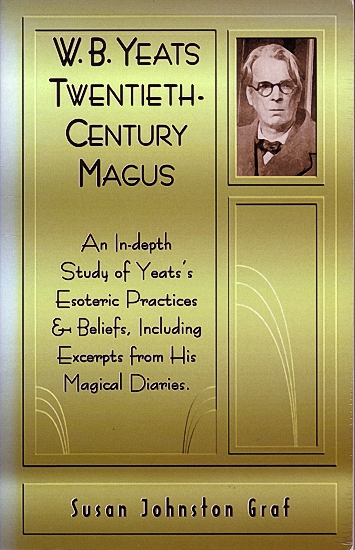 Just as Yeats the poet gives the clearest expression of his magical ideas, so it is the literary scholar who best introduces us to Yeats's texts—and Susan Johnston Graf is a model literary scholar: deeply versed in Yeats's work, she also possesses both a clear insight into his esoteric ideas and a rare sympathy with them. Concentrating on A Vision, Yeats's most baffling work, and on its unjustly neglected and equally enigmatic precursor, Per Amica Silentia Lunae, Graf traces the development of Yeats's magical world-view and analyzes its essential concepts.

She introduces us to the key symbols of the Rose, the Mask, and the Tower; to the idea of the creative tension between self and anti-self, to the empowering daimon and to the crucial role of sexuality in both the theory and practice of Yeats's magic. Exploring Yeats's mind in a fascinating and original way, Graf presents us with the real Demon est Deus Inversus: Yeats as a fusion of magician and poet, a true genius and a true Twentieth-Century Magus.
—R. A. Gilbert, antiquarian bookseller and esoteric scholar

W. B. Yeats—Twentieth-Century Magus is a comprehensive study of his magical practices and beliefs. Yeats moved through many different phases of spiritual development, believing that his life was an intellectual, spiritual, and artistic quest—a quest greatly influenced by Celtic lore, Theosophy, Golden Dawn ceremonial magic, Swedenborg's metaphysics, the works of Jacob Boehme and Neo-Platonism. For Yeats, writing poetry was an act of divine possession, and he believed that a perfected soul was the source of his inspiration, visiting him during times of superconscious awareness. Susan Johnston Graf meticulously documents and provides evidence that Yeats's poetry is a brilliant, lyric narrative of reality captured through the mind of a practicing magician working in the Western Tradition.