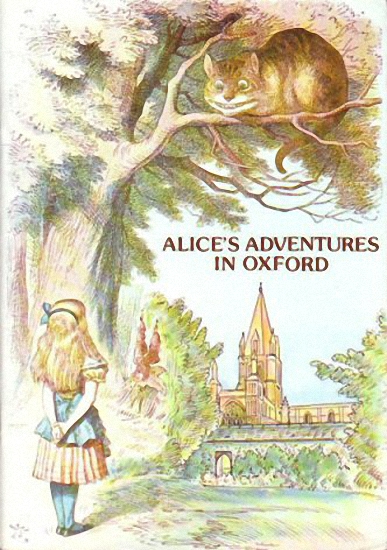 Alice in Wonderland and Lewis Carroll belong to Oxford. She was the daughter of the Dean of Christ Church and he was one of the college tutors. Alice was born in 1852 at Westminster School, where her father, the Revd Henry George Liddell, was head master. She was four years old when the family moved to the Deanery at Christ Church. The rest of the family then consisted of her brother Harry,aged nine, and two sisters, Lorina, who was six, and Edith two years old. The first record of her meeting Lewis Carroll is an entry in his diary in 1856: 'April 25. (F). Went over with Southey in the afternoon to the Deanery, to try and take a photograph of the Cathedral: both attempts proved failures. The three little girls were in the garden most of the time, and we became excellent friends.’

Mavis Batey tells the story of Alice Liddell, the daughter of the Dean of Christ Church, and the immortal friendship with `Lewis Carroll', the mathematics don, which inspired the Alice books.
Mrs Batey, who is married to the Treasurer of Christ Church, has made a special study of the Oxford background to the famous Alice stories, which throws a new and refreshing light on Lewis Carroll.

'She saw an ancient city, and a quiet river winding near it along the plain, and up the stream went slowly gliding a boat with a merry party of children on board — she could hear their voices and laughter like music over the water'.
From Alice's Adventures Under Ground.