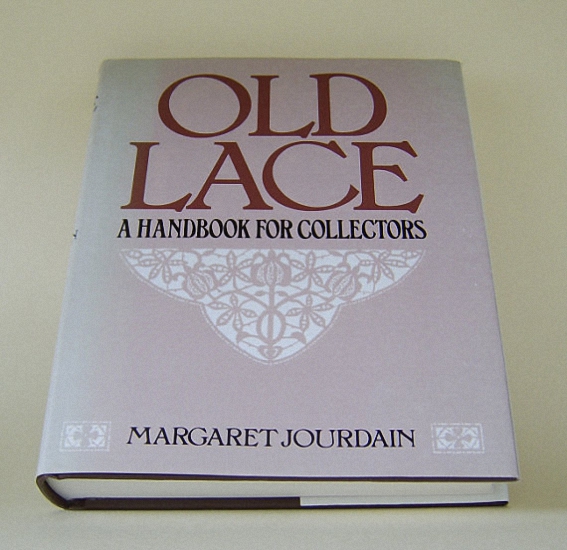 First published in 1908, written by one of the editors of Mrs Bury- Palliser's History of Lace, this is a particularly well-balanced study of old lace.

The author traces the development of lace from an early embroidery technique to its main branches in needle lace and bobbin lace. The book is remarkable in its readiness to tackle original source material, and in several cases the author was able to correct errors which had crept into earlier works and become fossilized through repetition.

The book is organised in chronological order of development in the chief lacemaking areas. In the first chapters on lace and cutwork, Mrs Jourdain produces evidence that needle laces were being made at a much earlier date than is commonly thought. She supports her statements with references to early documents and even frescos showing examples of cutwork and needlepoint fillings.

She moves on to deal with the gradual spread of both lace forms, giving a full description of each regional variety. Each new type is well documented and illustrated by clear photographs of examples from collections, many of which have been dispersed long since and so are no longer available for study.

In the chapters devoted to English laces, there is much helpful information about the dominant types, but the author also deals with the lesser known areas of lacemaking, such as Sherborne in Dorset and the Isle of Wight. Clear examples of some of our 'lost' laces are shown - for instance, three pieces of Ripon lace are illustrated.

This book is a valuable companion for both the collector and the lacemaker.