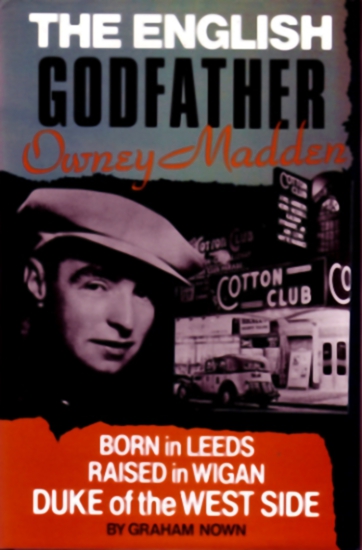 Owney ‘The Killer' Madden, declared America's most dangerous public enemy, was one of the most influential godfathers of organized crime this century.
Born in Leeds in 1891, he emigrated to America with his family at the age of eleven, although he never completely lost his Lancashire accent. His family settled in one of the most notorious areas of New York, 'Hell's Kitchen' ,where Owney was drawn into a life of petty crime and gang violence.

By the 1920s and 30s, Madden, the Duke of the West Side, ran New York. He was the owner of the Cotton Club, a place synonymous with the jazz era, and his rich and famous companions included George Raft, his best friend, and Mae West. During the dry years of the Prohibition he ran a chain of speakeasies, selling bootlegged beer and smuggled alcohol, and in this corrupt city he found little opposition from the police, the judges and the politicians, many of whom were on his payroll. Then in 1933, at the height of his notoriety, Madden agreed to be exiled to Hot Springs, Arkansas to avoid prosecution, in a million dollar deal that was so secret it could never be officially recorded.

In Hot Springs, Owney settled down into a life of quiet respectability. He married the postmaster's daughter, Agnes Demby and joined the local Chamber of Commerce. He was, however, constantly shadowed by FBI agents, who failed to pin anything on him in spite of the fact that he remained a supremely powerful underworld figure until the day he died in 1964.

The author, Graham Nown, has spent over four years researching his subject, travelling a total of 10,000 miles to interview Madden's widow, friends and former business associates. By studying Madden's voluminous FBI file, searching through government archives and dusty newspaper libraries, and persuading Agnes Madden to allow him access to her private collection of letters, diaries and photographs never before revealed, he has pieced together this thrilling account of Owney Madden's life.