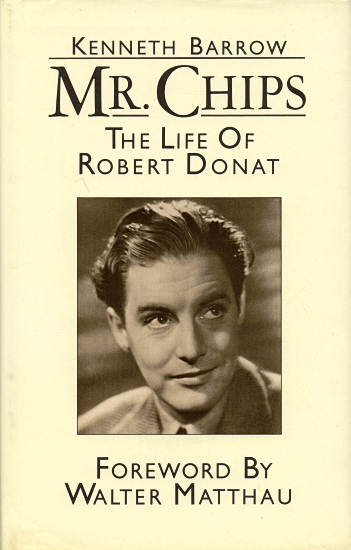 It is, surprisingly, more than a quarter of a century since Robert Donat died. Surprisingly because, due to the vigour of his screen persona, he is still with us in a dozen film classics.

Donat was one of the handful of stars to emerge from Britain in the golden years of the cinema, and he held a unique position by constantly refusing to be type-cast. Hitchcock claimed that Donat was responsible for the world-wide success of The 39 Steps. He received an Oscar nomination for The Citadel, and won the coveted award for his performance in Goodbye Mr Chips, his bestloved film. Other notable roles included Pitt the Younger, The Count of Monte Cristo, the Carson-like barrister in The Winslow Boy and the founder of cinema in The Magic Box. He bade a poignant farewell to his public as the Chinese mandarin in The Inn of the Sixth Happiness. But his first love was the theatre and this book also details this forgotten part of his life from childhood theatricals in the toolshed, through touring with Sir Frank Benson in Shakespeare, his first starring role as Gideon Sarn in Precious Bane, to his last performance as Becket in Murder in the Cathedral. It is the story of a man wracked with physical suffering, a chronic asthmatic with a voice of unforgettable beauty, a genius of an actor cruelly taken away at the age of fifty-three; it is the story of a father, a husband, a lover.

Official biographer Kenneth Barrow unravels the enigma of this gentle, passionate, private person who once claimed,'I never had any real security in my life until I found the false security of stardom'. Laurence Olivier, Marlene Dietrich, Charles Laughton, Ingrid Bergman, Ralph Richardson, Deborah Kerr, Irving Thalberg, Greer Garson, Alexander Korda and George Bernard Shaw are just some of the glittering characters who people his life story. Included is the testimony of many of these, together with substantial extracts from Donat's own writings revealing fluency and an individual wit.