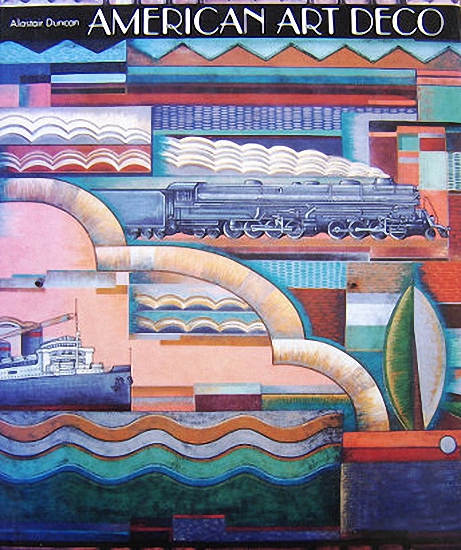 The explosion of Modernist art and design which made its original impact at the Paris Exposition Internationale of 1925 was quick to find an echo in the United States. Art Nouveau, a sensation in its time, had become tired and jaded, and the joyous exuberance of the Art Deco style was just what was needed to take its place.

Exhibitions of decorative arts were mounted in American museums, and the department stores competed with each other to introduce the new aesthetic to the American public. The artists at the forefront of this surge of creativity were at first European and predominantly French, but American designers were soon making their own contribution to the Deco style. As the dazzling illustrations in this book demonstrate, in sculpture, furniture, ceramics, architectural decoration, graphics, and virtually all the applied arts, American designers developed a dynamic, indigenous tradition.

Most of the important buildings of the 1930s, in all parts of the country, were embellished with Art Deco ornamentation — from the Oviatt Building in Los Angeles, decorated by Lalique, to New York's romantic Chrysler Building. Cinema-goers found the style adopted in films of the period, and Art Deco became part of the background of ordinary people. Yet, by the onset of World War II, Art Deco was almost played out and in a very short time it was completely out of fashion. Only in recent years has it become the target of enthusiastic collectors.

Alastair Duncan here explores in depth for the first time the wide and neglected subject of American Art Deco. With a wonderful array of more than 500 illustrations, including 233 in full colour, he reassesses and puts into perspective the work of such gifted artists as Donald Deskey, Joseph Urban, Paul Manship, Gilbert Rohde, Walter von Nessen, and many others — artists whose vision helped to transform American art and design.