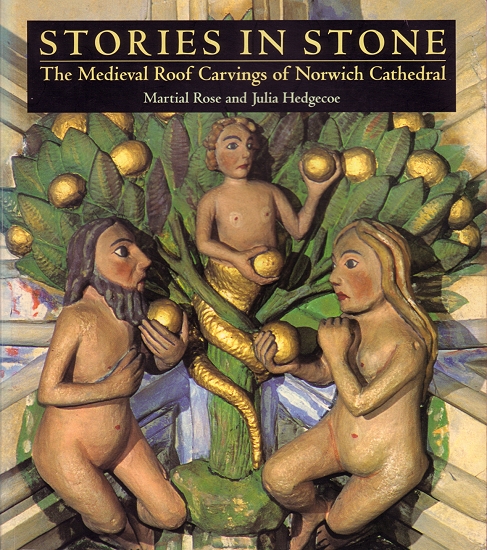 The magnificent roof bosses of Norwich Cathedral are one of the great hidden glories of medieval art. There are more than one thousand of these delightfully carved and painted keystones in the high stone vaulting, dating from 1300 to 1515 and measuring between eight and twenty-four inches wide. The vast majority are figure carvings uniquely linked together in storytelling patterns, reflecting a variety of pagan, Christian, and folk subjects. In quantity and quality, Norwich's bosses are among the most impressive in Europe, while their narrative arrangement makes them unparalleled in the medieval world.

Situated some eighty feet up from the floor of the cathedral, these ornaments are too distant to have been fully appreciated by worshippers over the centuries; by the same token, their inaccessibility has protected them from vandalism. Until recently their character and detail have been discernible to only a dedicated few through telescopes and binoculars, but modern technology has now made it possible to photograph the images and make them visible to the general public.

This book reproduces the most striking and interesting examples, selected from the hundreds of exquisite colour photographs taken by the distinguished photographer Julia Hedgecoe, under the auspices of the cathedral. They are introduced and fully described in a lively text by one of Norwich's foremost medieval historians, Martial Rose.