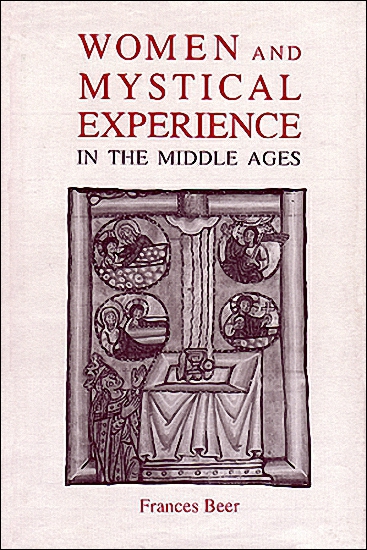 Beer, Frances: Women and Mystical Experience in the Middle Ages (11895)

This book is a study of three medieval women, Hildegard of Bingen, Mechthild of Magdeburg, and Julian of Norwich, all of whom were mystics. Although they differed radically in temperament, they largely transcended the antifeminism of their times - perhaps as a result of the confidence arising from their extraordinary spiritual experiences - and articulated their special revelations, even when they diverged from orthodox doctrine, in their writings.

Each of the women is here more fully revealed to a 20th-century audience by Frances Beer's close textual analysis of her work, supported by such biographical detail as remains. Their social milieu and historical context, carefully considered, also help us to understand them as individuals: however liberated, they are to some extent products of their environments. Hildegard's perception of her Creator is informed by the heroic ideal, while Mechthild's erotic experience seems to reveal the influence of the minnesingers. The solitary Julian's experience of tender intimacy with her Lord, to be shared with any who would be Christ's lovers, reveals an egalitarian confidence in the ability of the individual soul to progress towards oneness with the divine.

Each of the writers displays her `womanliness' in a variety of ways ?Hildegard by the inclusion of grand female figures such as Ecclesia and Synagogue, MechthiId by the elevation of the Virgin to divine status, equal to her son, and Julian by her understanding of the motherhood of God. Their individual natures are also further revealed through the author's examination of their resolution of a number of theological problems. By contrast, the works of two medieval men writing for women are also explored, for an indication of the degree to which their approach might be informed by antifeminism, and to compare their approach to the experience of union with that of Hildegard, Mechthild or Julian.