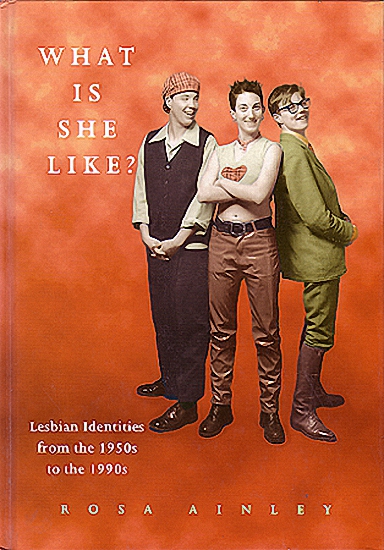 'Dyke', 'queer', 'diesel', 'butch', 'femme', 'zami', 'drag king', 'lesbian feminist', 'kush', 'sapphic' - just some of the names we use to describe ourselves, these 'labels' make a statement about how we identify as lesbians, be it sexually, politically, socially or simply as a fashion statement. But what are 'we' really like?

In What Is She Like? Rosa Ainley looks in depth at how lesbians see themselves and at the questions of identity that have always defined and divided the lesbian community. Covering the period from the 1950s, with its repressive influence on sexuality in general, through so-called sexual liberation in the 1960s, to the freedoms and limitations of (lesbian) feminism in the 1970s, she brings exciting and illuminating perspectives to bear on lesbian lives in the 1990s, when lipstick lesbians are the darlings of the mainstream media.

Ainley deconstructs the bizarre popular myths and stereotypes which often surround the twilight world of lesbianism, substituting for them a celebration of the multifarious nature of the lesbian subculture which has evolved during the late twentieth century. In a series of fascinating interviews interspersed with the text, over twenty women, of varying ages, races and backgrounds, talk frankly about their lives and lifestyles as lesbians, focusing on their own identity in terms of politics, leisure pursuits, fashion and affiliations.

Rosa Ainley is an editor, writer and photographer. Past publications include Death of a Mother: Daughter's Tales (Pandora 1995). Her work has appeared in a range of publications from The Guardian to Town and Country Planning to Diva.